A typical quintessential Bengali wedding is rich in rituals and heritage. Wedding vows are taken by the bride and groom but it is actually an amalgamation of two families. The rituals performed during the ceremony clearly unite both the bride & groom and their families. The rituals involve participation by the oldest and youngest family members making it a beautiful, colorful, joyous moment for one and all. Bengali wedding rituals are more or less similar to the common Hindu wedding rituals. If you are a Bengali bride-to-be, who wants to know all the Bengali marriage rituals and what they mean, scroll below!

Aiburo Bhat marks the initiation of the ceremony. The bride and groom celebrate separately the happy ending of their bachelor life in their own home. Generally, The mother or Other mother like relatives prepares her daughter/son for the meal. Personal favorites are served, but ‘payesh’ is the must-have Food. It’s usually held a day or few days before the big day.

The wedding day celebrating Dadhimangal, a ritual that feeds the bride and groom before the sun rises. They normally get up at 3 o’clock to 3.30 am to begin the ceremony. They both fast during the day (can not take any food after Dadhi Mangal) according to tradition. Typically it feeds curd, candy, chidwa (flattened rice).

Typically seven or nine married women (in unprecedented numbers) visit Ma Ganga after this ceremony, and she is invited for the wedding. Most conventionally ‘Mami’ (maternal uncle’s wife) stays in this team, and she leads the team.

Holud Khela comes next. Second, the groom is smeared with Mustard Oil mixed with turmeric paste. To the bride, a little is held. The family of the groom sends this holud with lots of gifts and sweets to the bride’s house. In this particular Totto, Dahi, Mustard oil, a Big Fish is a must thing. This is known popularly as Tattwo. At weddings, totto decoration has become very common.

The bride’s presents come out in various trays. The turmeric paste coming from the place of the groom is now being smeared on the bride.

In this ritual, the ancestors are invited to be part of the ceremony and give homage to their ancestors.. As stated earlier marriage for Bengalis is actually a communion of two families.

Bor Jatri is basically the baarat, where the groom, his family, and friends dress up for the wedding and start their journey to the bride’s house or the wedding venue.

In the evening the groom comes to the bride’s place usually in a car decorated with flowers. The mother of the bride along with four or six other married women receives the groom. The ritual is called Jamai boron.

The groom is taken to chadnatala (a place where the main marriage is organized) where an initial puja is performed along with the person who is going to do the KonyaDaan. Saat Paak is the Bengali wedding ritual where the bride sits on a low wooden stool called pidi. This stool is then lifted by her brothers and the bride is taken around the groom in seven circles. This ritual signifies that they are wound up to each other.

the bride and the groom look at each other in front of the guests. The bride removes the betel leaves from the front of her face and looks at the groom. This exchange of loving glance marks the beginning of the couple to be together in witness of their family and friends.

the bride and the groom exchange garlands of flowers three times. This Bengali wedding ritual marks as the first step of accepting each other as man and wife. After that, the bride’s father usually gives his daughter’s hand to son-in-law by a ritual called Konya Daan.

After this Hom ceremony takes place. Here the bride and groom sit next to each other in front of the fire whilst the priest chants Vedic mantras which repeat when asked to and make offerings to the fire.

Sampradan is basically the equivalent of Kanyadaan in a Hindu wedding ceremony. In the Bengali wedding ritual of Sampradan an elderly male member (almost always, her father)  of the bride’s family gives her hand to the groom when both their hands are tied by a sacred thread while reciting Vedic chants.

In this last and final Bengali wedding ritual, the groom applies sindoor or vermillion the bride’s hair-parting. Thereafter, the bride is considered as a married woman since applying sindoor is one of the many solah shringas.

After the Konyadan the ceremony continues in the bride’s place. The same night usually friends and brothers and sisters of the newlywed celebrate by playing different games like antakshari. It is called BASHOR. That is a big event and most wait time for everyone in the house, especially younger people. Nowadays the essence of Basor has fainted due to a shortage of time and lack of attraction for younger people. Usually called bashi biye as we shall read in the next para.

After the marriage ceremony gets over the next day a ceremony called Bashi Biye is organized.

The main attraction of the ceremony is Sindoor Daan. Here the groom smears vermillion (sindoor) on the bride’s head. The bride then becomes his wife.

Note that the bride leaves her father’s place on the second day after marriage unlike say Punjabi weddings where the bride leaves the same night since the wedding ceremony gets over in one day.

Amidst all the rituals, fun, frolic comes the saddest ritual is Konya Bidai. The bride leaves the father’s abode to enter her new family. Before leaving she throws paddy seeds (chawal) and aloo to mother’s Aanchal (end of a sari). This is a symbolic ritual to tell parents I am leaving after repaying all debts. Kankanjali marks the end of her stay in her father’s home.

The bride and the groom enter their new life. The bride goes to the groom’s family where again a Bodhu Boron is done. (Bodhu boron is a ritual done after the newly wedded daughter in law enters her in-laws home. It is a welcome gesture for the bride by in her in-laws.) This time the groom’s mother receives her Chele and Cheler bou – groom and the bride. The bride enters her new home.

Note that the night the bride comes into her husband’s house, the couple is put up in separate rooms according to tradition.

The celebrations come to an end the next day. In the morning the newly wedded bride serves the family ghee-bhaat popularly known as Bou Bhat. The serving of ghee bhat generally starts with the eldest member of the family.

The ceremony comes to an end with Fulsojja where the bed of the newly married couple is decorated with flowers to mark the beginning of a happy married life. 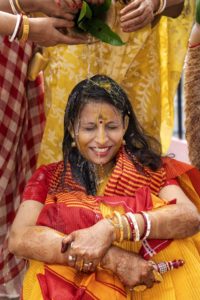